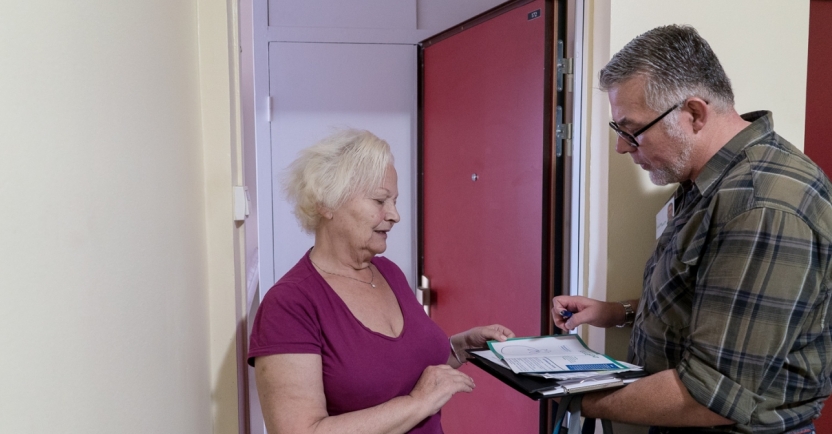 The association VoisinMalin launched in 2016 a project to fight fuel poverty in working-class neighborhoods by bringing together an ecosystem of players made up of employee-residents, energy suppliers, social housing landlords and other local partners from the public and private sectors. The Rexel Foundation continues to provide VoisinMalin with financial support and experience to help optimize and scale up its actions in the field.

In poor and disadvantaged areas in France, around 12 million inhabitants are faced with fuel poverty, and sometimes social isolation. These households struggle to pay for the energy they need for everyday use because of their limited resources or poor housing conditions. The current educational tools distributed via local energy agencies are not sufficient to improve their situation.

In some neighborhoods, many eligible people do not take advantage of existing assistance programs due to a lack of information, fear of stigmatization, or the complexity of the process. Les VoisinsMalins, employee-residents from the association, meet with these individuals by going door-to-door to create personal bonds and provide them with the help they need to fight fuel poverty effectively.

Thanks to the support of the Rexel Foundation, as well as the involvement of an ecosystem of social housing providers, energy suppliers, and local authorities, during the first year of the project VoisinMalin completed 10 missions involving 1,900 households (about 5,700 inhabitants) in 7 cities, with the participation of 43 field employees and 7 project managers. By continuing the project’s development, the association will be able to extend its actions to new territories, multiply its missions, and strengthen the assistance provided to low-income neighborhoods in the area of fuel poverty.

The project deployment phase will encompass the following actions:

Find out more about VoisinMalin

The association VoisinMalin identifies, hires, and trains employee-residents, known as “Voisins Malins” (“smart neighbors”), to act as home visitors in working-class neighborhoods. They make door-to-door visits, listen to their neighbors, and inform and mobilize them regarding the projects, services, and rights that concern them but that they do not take advantage of due to a lack of information, feeling of lack of legitimacy, or defiance toward institutions. Recognized by the residents as peers, they act as messengers for different actors invested in the neighborhood (associations, local authorities, social housing landlords and businesses) and are the carriers of last mile information, which is often the missing element from attempts to reach the targeted communities.

Each “door-to-door” mission is constructed with a local actor on a subject that matters to residents: for social housing landlords, living environment and housing development; for local authorities, access to rights, education, and culture; for public employment agencies, the ARS (Agence Régionale de Santé, Health Regional Agency), water, energy, or transport facilities, etc.

Such tailored missions, funded by these actors, facilitate their relationship with the residents and allow them to adapt their level of service by gaining a precise understanding of their needs and constraints.

The association is active in the Île-de-France region (Essonne, Seine-Saint-Denis, Val d’Oise, Paris 19th arrondissement), and in Lille-Sud, Villeurbanne and Marseille.

This project is run in partnership with Veolia.